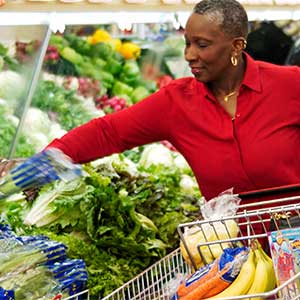 "This study suggests that a healthy overall diet can play a vital role in preventing type II diabetes, particularly in minority women who have elevated risks of the disease," said the study’s lead author Jinnie Rhee.

The researchers analyzed data from thousands of white, black, Hispanic and Asian women in the United States who provided information about their eating habits every four years and were followed for up to 28 years.

Healthy eating reduced the risk of diabetes by 55 percent in Hispanic women, 48 percent in white women, 42 percent in Asian women and 32 percent in black women, according to the study published online Jan. 15 in the journal Diabetes Care.

When all the minority women were combined into a single group, those with the healthiest diets had a 36 percent lower risk of diabetes than those with the poorest diets, the researchers found.

They noted that minority women are at greater risk for diabetes than white women. In terms of actual numbers, a healthier diet offered greater protection for minority women, they found.

For every 1,000 women, they said, healthier eating habits can prevent diabetes in eight minority women per year, compared with five white women.

"As the incidence of type II diabetes continues to increase at an alarming rate worldwide, these findings can have global importance for what may be the largest public health threat of this century," Rhee said in a news release.

About 29 million people in the United States and 47 million people worldwide have diabetes, the researchers noted. The disease could be the seventh leading cause of death by 2030, according to the World Health Organization.

The Link Between Diabetes & Heart Disease

Smoking, Diabetes May Be Especially Risky for ...

March 21, 2018
A study published in The BMJ in November 2018 found that smoking, diabetes and high blood pressure increased women’s risk for heart attack even...
Next Post
Back to blog home

Do I Have Diabetes?

Smoking, Diabetes May Be Especially Risky for Women's Hearts

How to Turn Prediabetes into No Diabetes

The Link Between Diabetes & Heart Disease